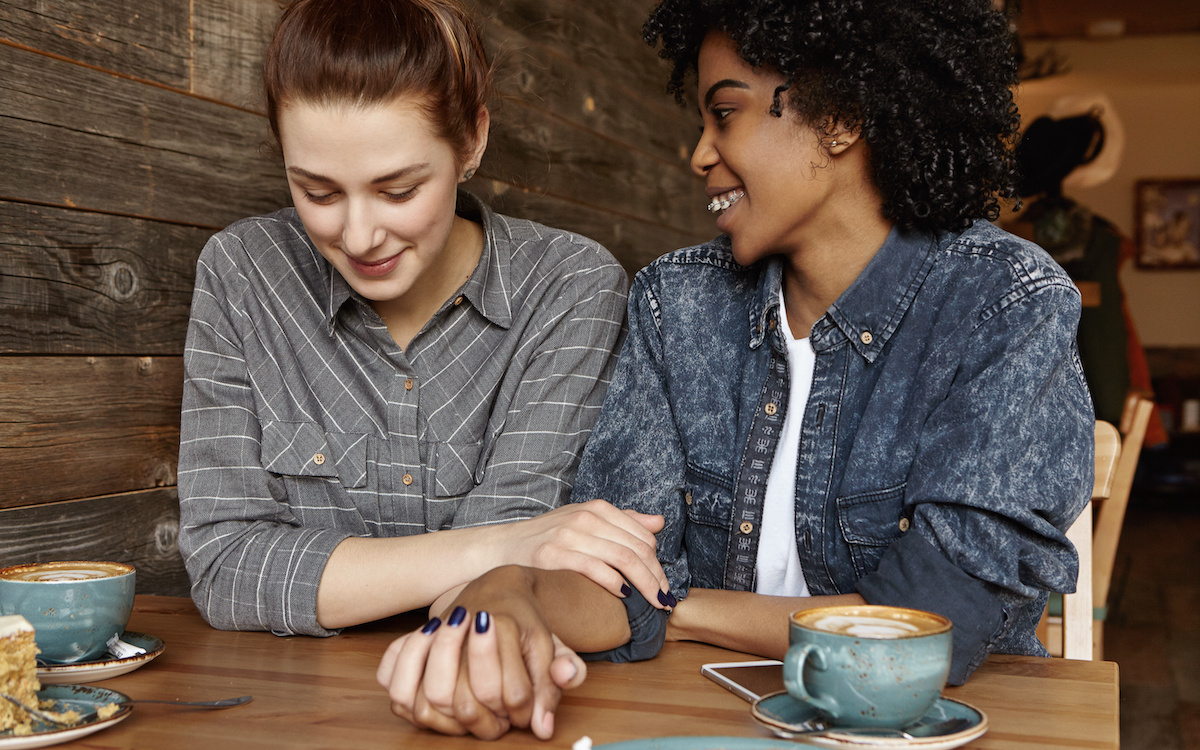 Claiming your identity is about how you understand the truth about yourself and your life in the here and now.

There’s something really nice about jointly writing this article as two lesbians, articulating our identity/identities in conversation with each other, insisting on our own voices as testimonies despite a heteronormative and patriarchical world that often chooses names and narratives for us.

To briefly elaborate on the term “lesbian” is usually to describe lesbians as women who love other women, although this gets a little fraught because some nonbinary people identify as lesbians, and some lesbians love nonbinary people. Perhaps a more accurate shorthand would be people who are not men who love other people who are not men, although that framing is woefully malecentric and centering men is definitely not what being a lesbian is about! Some lesbians additionally identify as “gay” or “queer” as an alternate or complimentary way of describing an identity that is inclusive of wider gender experiences.

We understand our sexual and/or romantic desires as primarily or exclusively passionate about other women and nonbinary people - lesbians differ in this way from bisexuals who identify as having attractions to multiple genders. However, some lesbians do have histories of relationships with men, which does not make a person any “less” of a lesbian. Sexual behavior or expression does not always equate to sexual identity, especially since many people begin their adolescent or adult lives assuming themselves to be heterosexual by default due to the heteronormative expectations of mainstream society. Claiming your identity is about how you understand the truth about yourself and your life in the here and now.

Lesbians have a variety of experiences of gender expression - we may express ourselves as masculine, or feminine, or both, or neither.

Identifying as a lesbian is not a license to perpetuate transphobia or engage in transmisogyny. “Lesbians” includes lesbians who are transgender women, and lesbians love transgender women. As Catholics, our liberation faith calls us to not only be free from oppression, but to also not become oppressors and welcome all to the table. Trying to deny transgender women womanhood or claiming that attraction to transgender women invalidates lesbian identity is trafficking in gender essentialism, the same oppressive rigidity that underpins complementarianism.

Lesbians have intersectional identities that overlap and differ with the identities of straight women and gay men. Like heterosexual women, lesbians experience misogyny through being stereotyped as “weaker” and less capable than men and being sexually objectified by men. Like gay men, lesbians experience homophobia, through shaming, discrimination, and violence for expressing interest and passion toward the “wrong” gender/s and not staying within our assigned hetero-patriarchal gender role. We can find ourselves needing to insist on our dignity within both feminism and the LGBTQ rights movement, due to straight women’s homophobia and gay men’s sexism.

Lesbians of color may also find our experiences are best understood within the context of race and/or culture. Some prefer to use terms similar to “lesbian” that come from their heritage - for example, people who are African or of African descent who identify as Same Gender Loving, or people from the Arab diaspora who describe themselves as “mithliyah” (which comes from the Arabic word for “sameness”).

There’s so much intentionality involved in identifying as a lesbian. It leads you, perhaps compels you, to look outside of norms and within yourself and to others like you. It is a divine journey. It is an ongoing process of deconstructing the idea of who you “should” be and figuring out who you are and who you are called to be, and purposefully aligning your life accordingly. Identifying as a lesbian connects you to the histories of untold generations of women and non-binary people and our love and desire for one another, outside of the confines of patriarchy. A history of living our lives for ourselves, and for each other, and knowing family in its many forms